I have now typed in Colemak for 391 days in a row, so I feel somewhat qualified to tell you why you should consider (not) switching your keyboard layout.

Colemak is a modern alternative to the QWERTY and Dvorak layouts, designed for efficient and ergonomic touch typing in English. Learning Colemak is a one-time investment that will allow you to enjoy faster and pain-free typing for the rest of your life (colemak.com)

Simply, Colemak places the most commonly typed letters (based on the English language) on the home row and determines the position of the rest by accounting for finger distance, row jumping, same-finger typing etc, etc.

Switching to Colemak takes long. And is just hard. You have to break your old muscle memory. Typing is going to be a slow, ugly drudge for a while. I got back to averaging 70 WPM (my OG QWERTY speed) after a (long) month. Then again, my roommate Jack got back 84 WPM after two days (he was formerly avg 140)-- this is a developing situation (he just got 84 five minutes ago) but at this rate I'm sure he'll get 140 by the end of the week. This is the hardest part of the whole process.

After you learn Colemak, good luck using other people's computers. It's embarrassing. When you learn Colemak, you have to destroy all your pre-existing typing habits, thus, you (need to) forget QWERTY (on a regular keyboard, phone fine). I now carry around a USB with Windows/Linux Colemak files (which isn't terrible since I always have a password-backup USB on me). Regardless, it's a hassle. Additionally, sometimes you do not have permissions to install layouts (school/works computers). To circumvent this, I was looking into building a physical middle-man between the keyboard and computer using an Arduino. The parts arrived but now that I'm at Berkeley and I have no free time (or, there are more fulfilling things to do with my free time). Maybe this summer. Anyways, more reasons not to use Colemak:

If you use VeraCrypt or any other encryption system that requires unlocking the drive prior to the operating system loading (so, yes, LUKS) then typing your password is pain: your keyboard will be typing in QWERTY (unless you have a hardware Colemak keyboard, which you probably shouldn't). You can circumvent this by setting your keyboard layout temporarily to QWERTY, then typing your password like you normally would (just type what you would by pressing the keys as if they were Colemak), and you're set. Additionally, some (most) of Linux DE's do not load the layout on the initial lock screen so you'll have to slowly type it out. I've found that after a while my brain can store the QWERTY-muscle memory of my most common passwords so it's not terrible after you encode the important/common ones in your brain.

Vim is not as slick: your movement keys aren't in the same proximity. You can rebind the keys, of course, but out of the box (ex. when you SSH into a machine) it's annoying. More generally, shortcuts may be more a hassle for other programs. For what it's worth, Colemak does have C and V unchanged (for copy / paste respectively) unlike Dvorak.

Finally, I can only imagine it's fairly easy to fingerprint Colemak (or really any non-mainstream layout) users, either through reading the current keyboard layout or by unique, colemak-specific typing mannerisms (look up 'Behavioral Biometrics'). This only matters if you're a privacy nut or Snowden-level wanted.

Summary: the hardest part is the first month (getting back to your old WPM). The rest of the reasons are mostly small nuisances and edge cases that you can judge if they matter.

It's fun to learn as a challenge. If you like learning skills, this is one of the ones to at least try out. I can tell you it's more useful than knowing morse-code (besides perhaps ...---...) and around the same impressiveness as being able to solve a rubik's cube. It's also fun to type: if you go online you'll see people talking about the sweet 'finger rolls' that Colemak is conductive to. If you switch, type 'tenderheartednesses' and you'll see.

You will probably get faster. Then again, I may have gotten equally better had I spend this time and focus towards improving regular typing. Anyways, I went from averaging 70 to 100 WPM. Below is my progress on monkeytype: 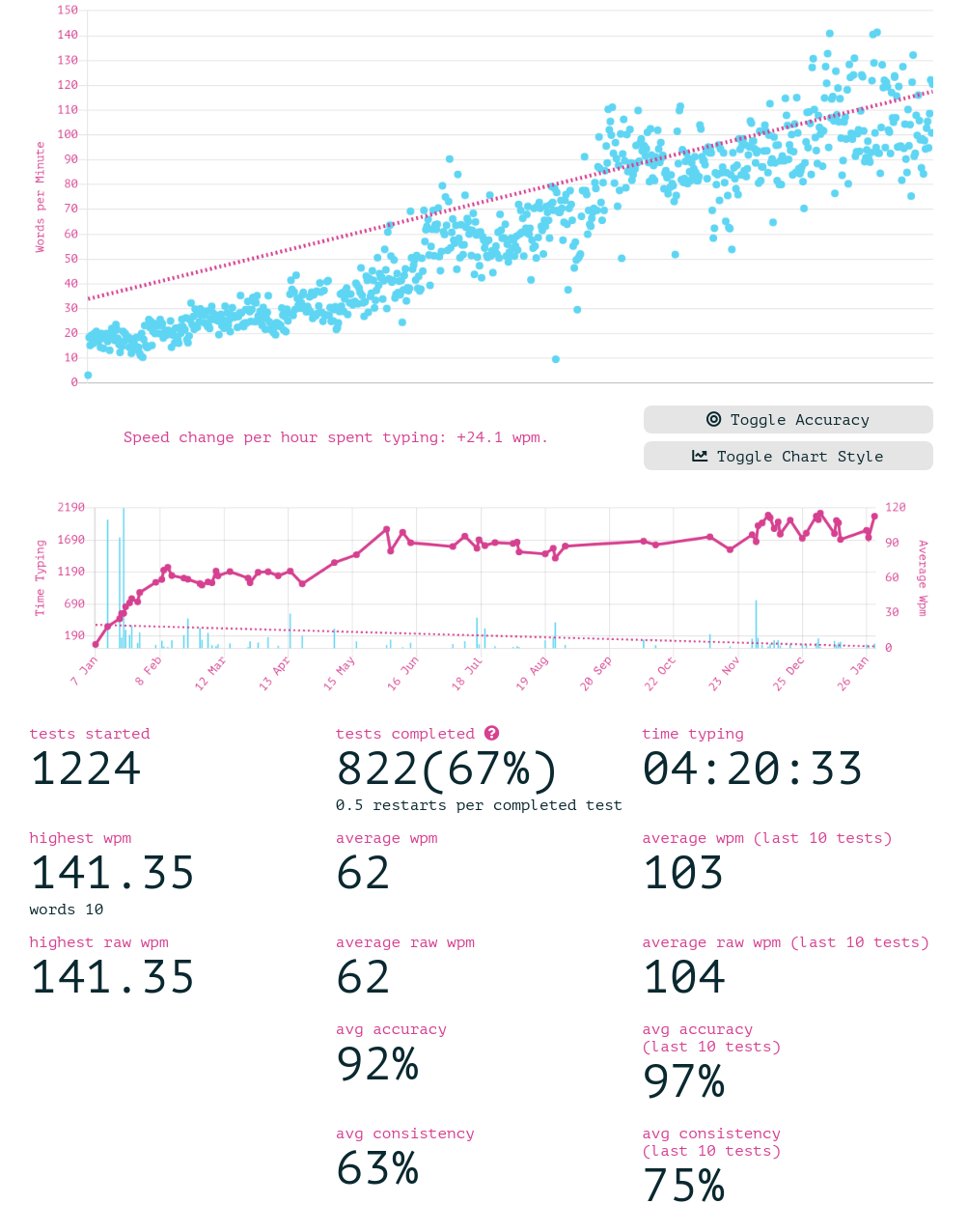 Also, you may not get RSI or carpal tunnel which is pretty dope 👌.

To end this post, I'm actually a liar! I use a derivative of Colemak, called Colemak-DH, which has a few other additional tweaks you can read about on the website. Skim it and choose if you want it or Colemak—— it really doesn't matter all that much. One minor thing is that base Colemak is included Manjaro (and presumably other distros) while -DH is not (making set up a bit more painful.)

When you do decide to take the Colemak pill, set aside a weekend where you are okay being unproductive while using a computer. To learn Colemak, you have to use it lots. You can't swap back between it and QWERTY, so you have to grind back to an acceptable WPM.

After running the installer (colemak installers, -DH installers), I started by going through all the keys on keyzen colemak, then colemak.academy, and finally grinding monkeytype. This is what I recommend to others, and how my roommate Jack is learning very quickly. You may also want to checkout the subreddit to see what's worked for others. Ultimately, it boils down to focusing on breaking your old habits. If you think that sounds lke a fun challenge, highly recommended!